HAS was happy to present an exciting, new event format: a lecture and garden tour/potluck.  It was our pleasure to introduce HAS member and friend, Liz Burnett. Liz presented a lecture about her personal garden’s transformation that took several years of planning and implementation.

In 2011, Liz and her family settled in Colorado and bought a home in Colorado Springs. The property was well situated but the landscaping was minimal and mostly overgrown. Relying on her background in architecture coupled with her passion for design and love of gardens, she undertook a major upgrade and re-designed her landscaping.

After Liz’ illustrated lecture and hearing all about her trials, tribulations and triumphs, participants toured her gardens on a beautiful and warm summer evening, and enjoyed a delicious potluck supper with al fresco dining.

No Water and Loving It:
Techniques and strategies for
surprisingly lush gardens!

We were extremely pleased to welcome Kenton Seth, our speaker for the Founders Day Lecture. Kenton is a young native of Colorado, a plant aficionado, and native plant addict/hunter who who lives and plays in Grand Junction, Colorado.

Presented by Diane Brunjes, HAS Gardener 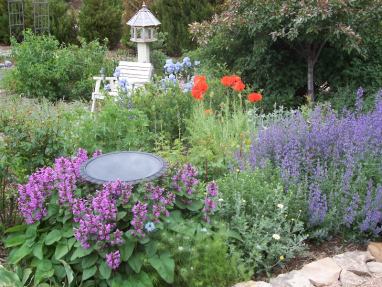 Thanks go to Diane Brunjes by everyone who attended the sessions in April on designing with plants. It was a thoroughly enjoyable and idea-inspiring experience. We all came away with ideas on planning our gardens and adding wonderful three-season, colorful trees, shrubs, and perennials.

We saw a wonderful turnout at our Lorelei dedication on September 9, 2017, as part of the Historic Van Briggle Pottery Festival. H.A.S. President Chella DiMenza introduced special guests including Matt Mayberry, Director of Colorado Springs Pioneers Museum, and Kathy Honea of the Van Briggle Pottery Association. We had beautiful weather, visited with a lot of people, and enjoyed lemonade and a special cake to celebrate this beautiful addition to the Heritage Garden.

We are extremely proud to announce our speaker for the Founders Day Lecture, Mike Kintgen. Mike is the Curator of Alpine Collections at the Denver Botanic Gardens where he oversees the Alpine Collection and eight gardens including the Rock Alpine Garden, and South African Plaza.

Mike has worked full-time at Denver Botanic Gardens (DBG) since late 2004, but has volunteered and helped out since the mid 1990’s. In 2012 he finished a two-year project to have DBG’s collection of alpines recognized in the North American Plant Collection Consortium through the American Public Garde 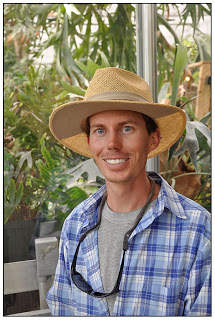 ns Association. He interned at both at Chicago Botanic Gardens and at Rhododendron Species Foundation under Steve Hootman. He has been a member of NARGS (North American Rock Garden Society) since 1993 (age 12) and is a former president of the Rocky Mountain Chapter of NARGS. Travel opportunities since a young age have allowed him to observe alpines in Alaska, Hawaii, Argentina, Morocco, Spain, the Alps, and throughout the American West.

Mike began gardening at a young age with a specific interest in alpine and rock garden plants.  Anything with chlorophyll attracts his attention but especially cushions and buns, along with the genera Eriogonum, Penstemon, Phlox, Saxifraga, Dianthus, Gentiana and Androsace.  He currently gardens in both Denver and Steamboat Springs, Colorado. The two different climates allow him to experiment with a wide range of plant material.

Mike is a popular speaker in areas around Colorado and the U.S. on the topic of rock gardening, and botanic travel. He has lectured as far away as Sweden, Germany and Argentina on Denver Botanic Gardens and its current focus on steppe and high-elevation floras found in semi-arid regions around the world.

He is currently working on a masters degree in Alpine Ecology at Regis University in Denver, CO.

We sincerely welcome your donation!

Are you having a special event and want to reserve a garden? Do it here.

Here’s a list of deer-resistant plants HAS gardeners have assembled: HAS Deer_Resistant_Plants