by Diane Engles, HAS Trustee 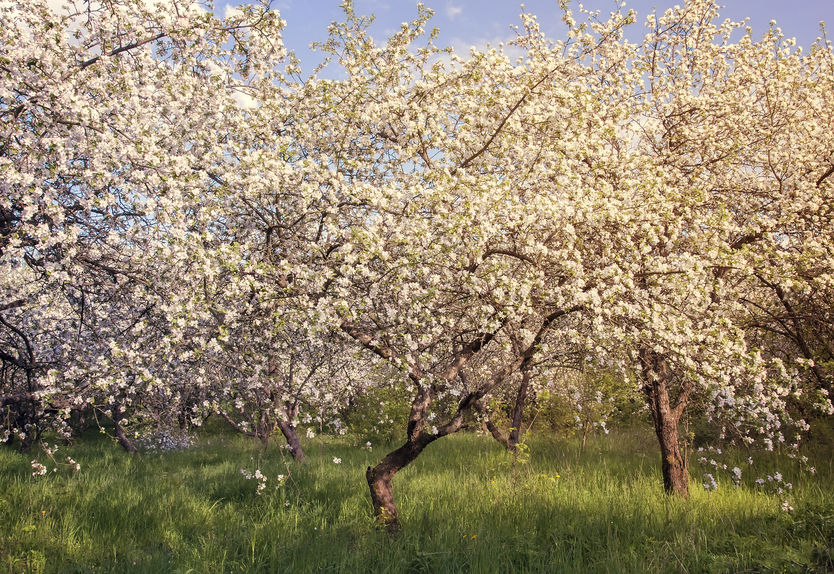 Recently I came across an article about the rediscovery of the Colorado Orange apple, which was thought to be extinct. I was surprised to find out that in the late 1800’s there was a successful apple industry both along the Front Range including Fremont County and in the Western part of the state.

Though they were told that orchards wouldn’t grow in Colorado due to the high elevations, settlers in 1800’s experimented with different growing techniques and varieties and created a thriving apple industry.  In 1922, there were 48,630 apple trees in Montezuma County, and at least 50 different varieties of the fruit. The apples varied widely in color and flavor and keeping quality. Some apples were bred for cider-making as well as eating. These apples were called “spitters” due to tannins that made them unpalatable, but excellent for making hard cider. Contrast that number with the 10-15 varieties carried by local nurseries today.

Fremont County also had a thriving apple industry which began with Jesse Frazer of Florence who was the first man in the Colorado Territory to successfully raise apple trees. In 1867, he planted his first orchard and established the first Apple Tree Nursery in Colorado. He is also known for discovering and naming the famed Colorado Orange apple.

Other orchards followed and a thriving industry was established which lasted well into the 1930s. An article from the Cañon City Daily Record dated April 14, 1905, documents five boxes of Cañon City’s finest apples being delivered to President Teddy Roosevelt while he was at camp in Colorado, compliments of the Fruit Growers Association. 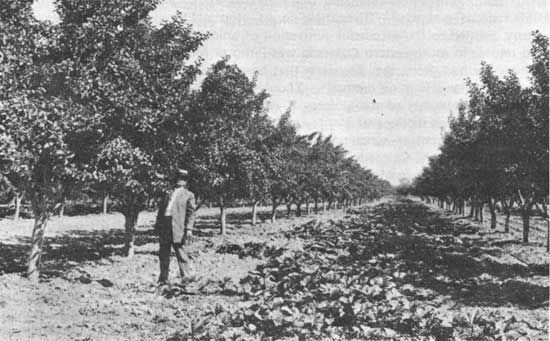 However by World War II period production had declined and commercial orchards started to die out. According to a Cañon City Daily Record article from 1990, the fall of the orchards in the area largely had to do with the climate, with the Western Slope offering more stable spring weather than Fremont County.

On the Western Slope of Colorado, the Grand Valley apple boom occurred about 1895 when promoters planted thousands of acres, in five, ten, twenty, and forty-acre plots. Western Slope fruit won prizes throughout all parts of the U.S. for the fruit’s beauty, color, and taste. In 1908 fourteen varieties of Grand Valley apples won sweepstakes at Cornell University.  Montezuma County apples took three of four gold medals in the St. Louis World’s Fair in 1904.Two years later, they earned 101 of the 104 ribbons bestowed on apples at the Colorado State Fair. 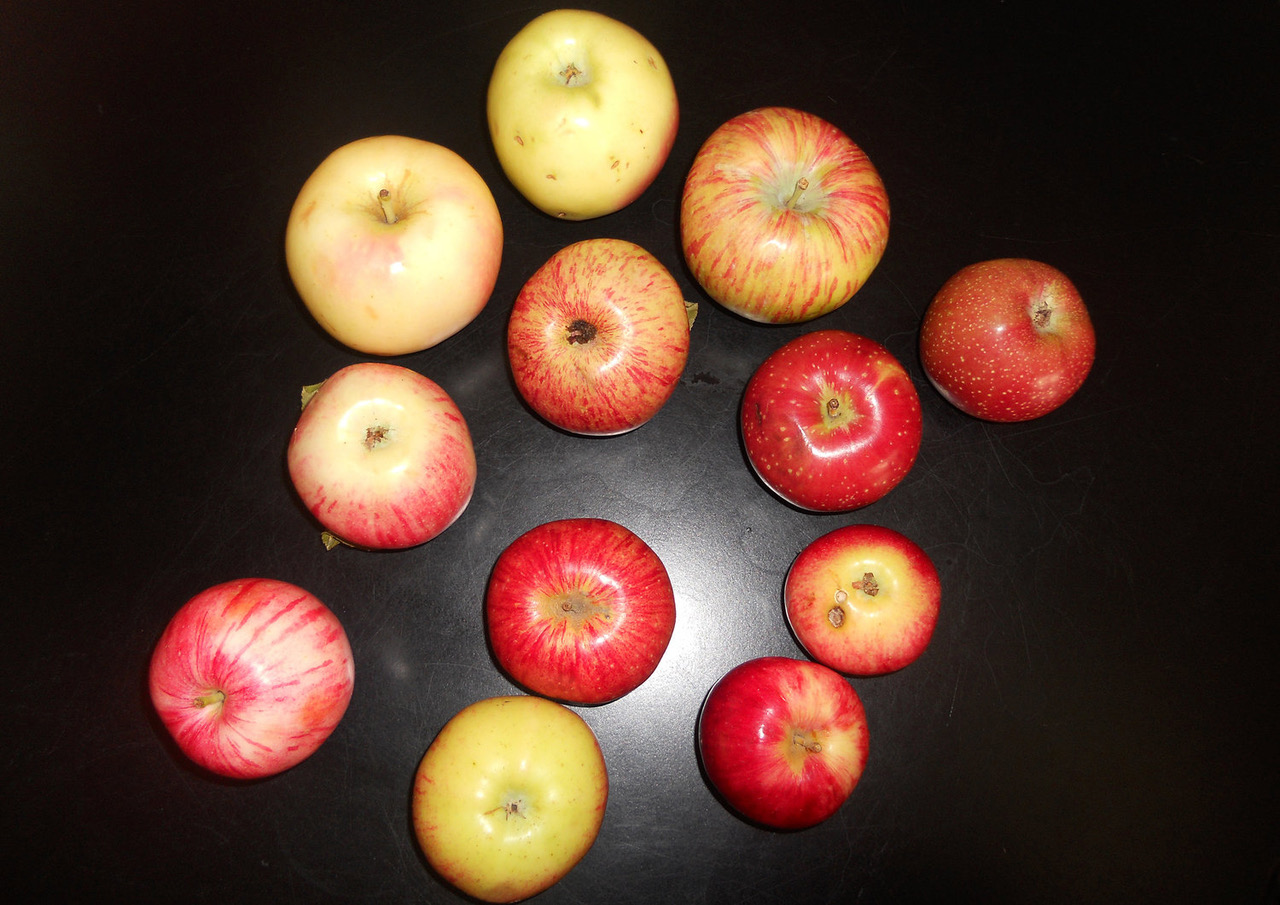 The Colorado apple industry declined due to several factors. Orchards failed due to poor management by orchard owners from the east who did not know how to manage fruit production in a harsh climate. Over-irrigation in soils with poor drainage allowed salts to build up in the soil, stressing the trees and making them susceptible to disease.

Another big contributor was competition from Washington State with its milder climate and focus on producing large quantities of just a few varieties. At some point growing an apple orchard in Colorado became a losing business proposition. 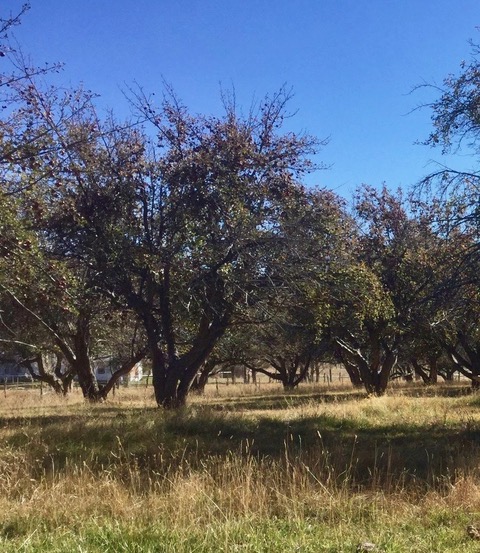 Some of these old orchards still remain, as well as trees hidden in subdivision backyards, sections of hay fields, abandoned homesteads, and open spaces. The Montezuma Orchard Restoration Project  located in McElmo Canyon near Cortez, Colorado, was created to identify and rescue these old varieties. The founders, Addie and Jude Schuenemeyer were running a nursery in Western Colorado and kept hearing from old-timer customers nostalgic for apples they had known as kids. Their interest piqued, Jude and Addie  began to search out old historic trees and learned to graft so that these old apple varieties could be saved. They were able to obtain DNA testing from USDA-ARS National Laboratory for Genetic Resource Preservation in Ft. Collins for assistance with identification. Photo Credit:  Montezuma Orchard Restoration Project 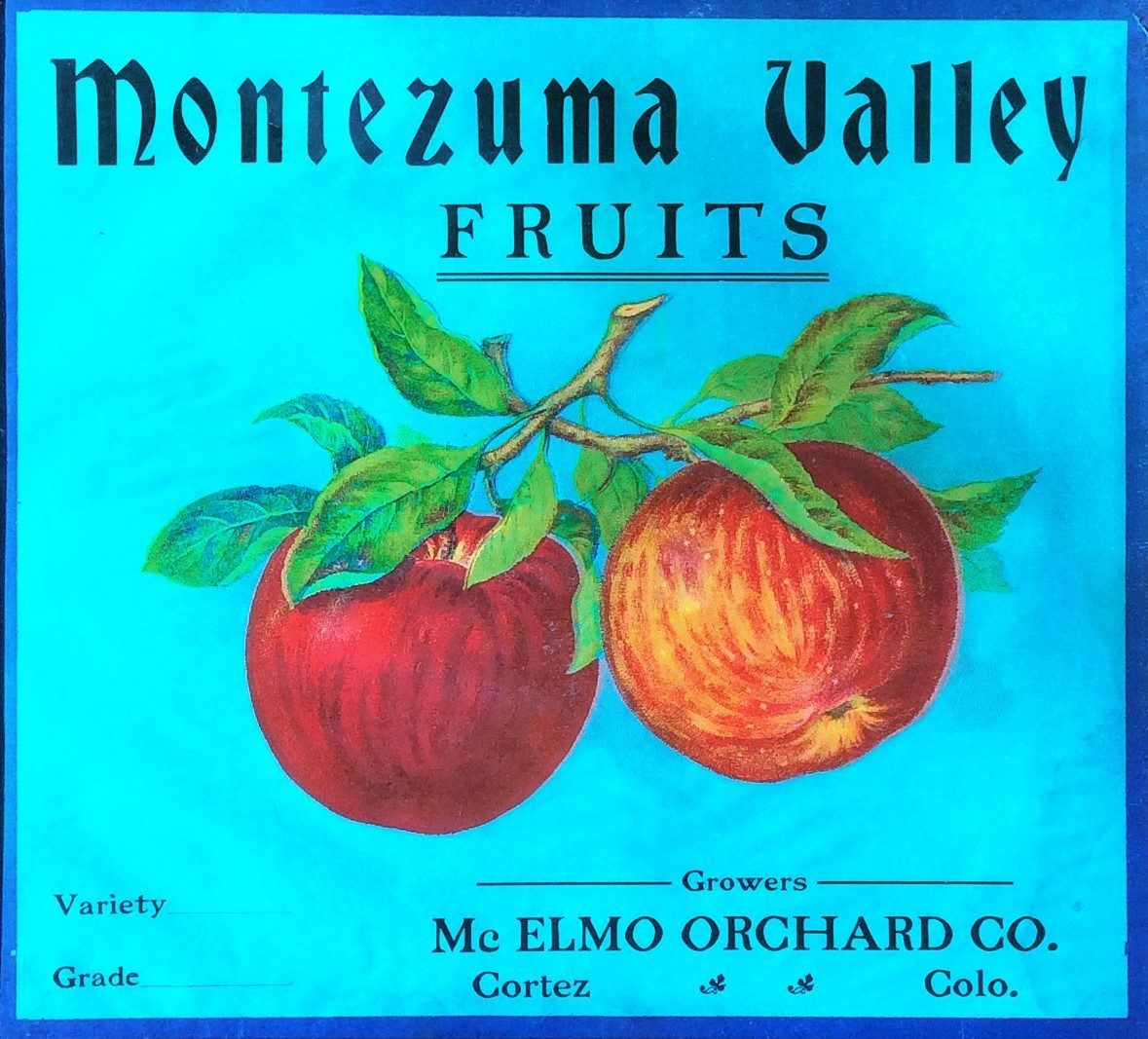 In their own words: “Montezuma Orchard Restoration Project (MORP) works to preserve Colorado’s fruit- growing heritage and restore an orchard culture and economy to the southwestern region.”

“ By searching historical books, reports and records, we have so far documented 436 varieties of apples that were planted in Colorado prior to 1930. Many of the apples on this list we find still growing in our landscape on trees up to 100 years old or older. Others, nearly 50% of the list, are now considered lost/extinct. This great diversity disappeared not because these varieties did not grow well here, rather because many were simply not shiny red apples representing the standard of the time. “  Photo Credit:  Montezuma Orchard Restoration Project

One of the apples they really wanted to track down was the famous Colorado Orange. It is special because of its Colorado origins (Fremont Country), color and flavor profile. Its coloration is yellow with a reddish blush; the flavor profile is complex — tart and sweet with a bit of a citrus bite.

Scheuenmeyer had tried and failed to find a tree in Montezuma County. He knew of its Fremont county origins and managed to get in touch with Paul Telck, the owner of a 40 acre historic orchard.  Telck thought he had a Colorado Orange tree, so the Scheuenmeyers made the trek to Fremont County. The age and location of the orchard added up as did the coloration which matched the USDA Pomological Watercolor Collection’s watercolor representation. Scheuenmeyer submitted samples for DNA analysis and found that the tree didn’t match any other known apples. They then matched the apples to the watercolors’ color, shape, and cavity characteristics. The results were good. 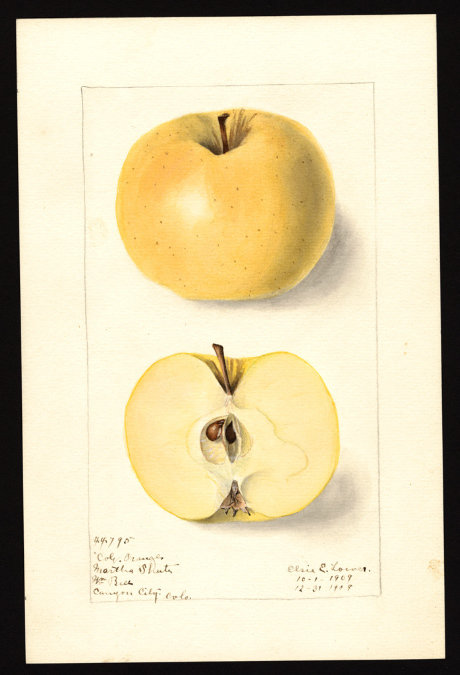 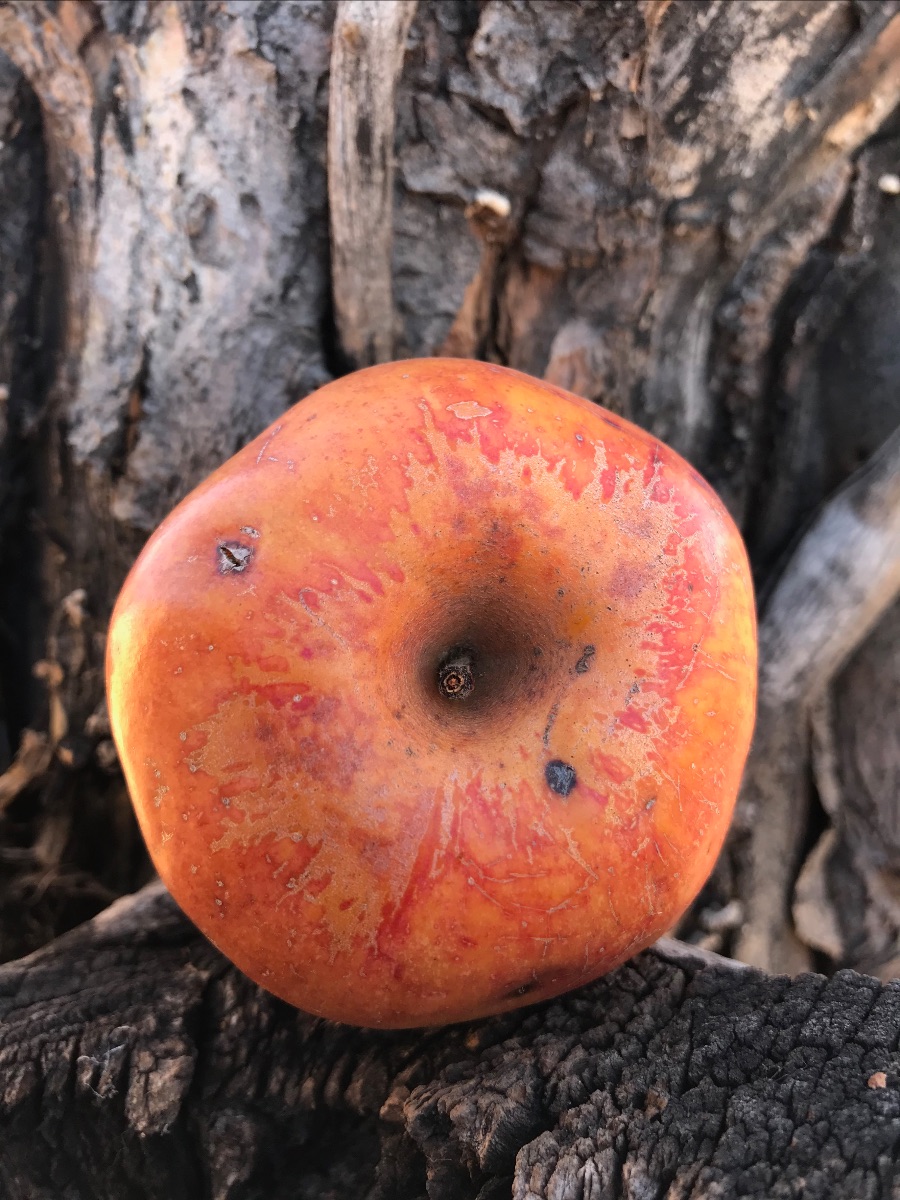 There are now young grafted Colorado Orange trees growing at MORP; I will wait impatiently until they are able to offer them for sale. 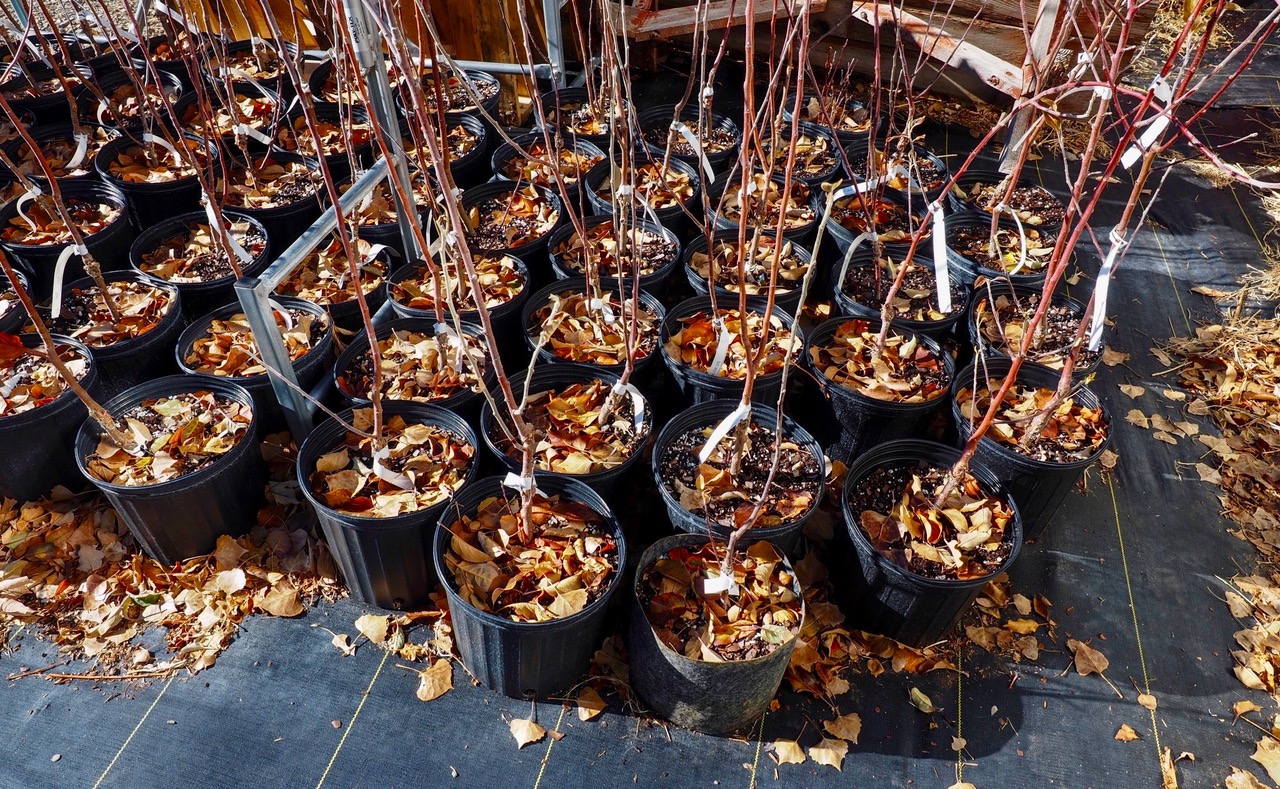 While doing research for this article, I found several excellent resources online that further detail the Colorado apple industry’s history and the search for the Colorado Orange. I highly recommend them for further reading:

The Comeback of the Endangered Colorado Orange,  an Apple

A Long History of Fruit Production in Colorado