(Published originally in the March 2020 HAS News and Announcements)

by Diane Engles, HAS Trustee

The National Garden Bureau has declared 2020 to be the “Year of the Lavender.”  Lavender is a deserving plant in any year! With outstanding intense fragrance, silvery foliage and xeric qualities, it is a multi-talented addition to any garden.

Cultivated for centuries, this drought-tolerant member of the mint (Lamiaceae) family has 47 species. It has a wide range of native habitats, ranging from Cape Verde and the Canary Islands, across Europe to northern and eastern Africa, the Mediterranean, and from southwest Asia to southeast India.

In addition to lavender’s floral show, essential oil can be extracted from the blossoms, and dried lavender is used in sachets and potpourris. Lavender is also used as a culinary herb. The blend “Herbes de Provence” is used in soups and roasts; lavender also finds its way into desserts such as lavender shortbread and lavender ice cream.

Most lavenders are actually subshrubs and will develop woody stems over time. They are deer- and rabbit-resistant — many gardeners with deer problems interplant them among plants they wish to protect. While they resist deer and rabbits, pollinators including hummingbirds and native bees find them hard to resist.

Lavender thrives in full sun, heat, and fast-draining, low-fertility soils. Lavenders do not like saturated roots, so avoid planting them in compost-enriched, water-retentive soils. If you have clay soil, amending with inorganic mulches, such as gravel or sand will help. All lavender types need little or no additional fertilizer, and after establishment are xeric. However, during their first growing season in the ground, they need regular irrigation several times per week to establish themselves. Once established, water much less frequently, but deep watering is their preference. In spring, wait until new growth starts to prune. Pruning too early can kill the plant.

Lavender can be grown in containers. Terra cotta pots are good choices since they tend to keep soil on the dry side. Use a soil that provides sharp drainage. You can over-winter lavenders that aren’t hardy in our area. Bring plants indoors before frost arrives and store them through winter in a cool room near a bright window or in a cool basement with grow lights, watering just enough to keep plants alive. Move plants outside in spring when all danger of frost has passed.

One of the oldest English Lavenders, Munstead (L. angustfolia ‘Munstead’), was introduced in 1916 by the English garden designer Gertrude Jekyll. It is hardy to Zone 5. Newer cultivars Hidcote Blue and SuperBlue, are hardy to Zone 4. There are over 40 cultivars of English lavender with colors ranging from violet to pink to white. Sizes range from compact at 10-24 inches tall and wide to 2-3 feet tall and wide, so there is an English lavender for every garden! English lavender blooms from late spring into summer. Deadhead or harvest flowers to promote continued bloom.

Munstead (L. Angustifolia ‘Munstead’) is one the hardiest and easiest to grow varieties of English Lavender. Hardy to Zone 5, its large blooms mature to a bold, deep blue-purple color. It is a smaller lavender growing 12-16 inches tall and 24 inches wide. It grows well in containers and works great in hedges or knot gardens. 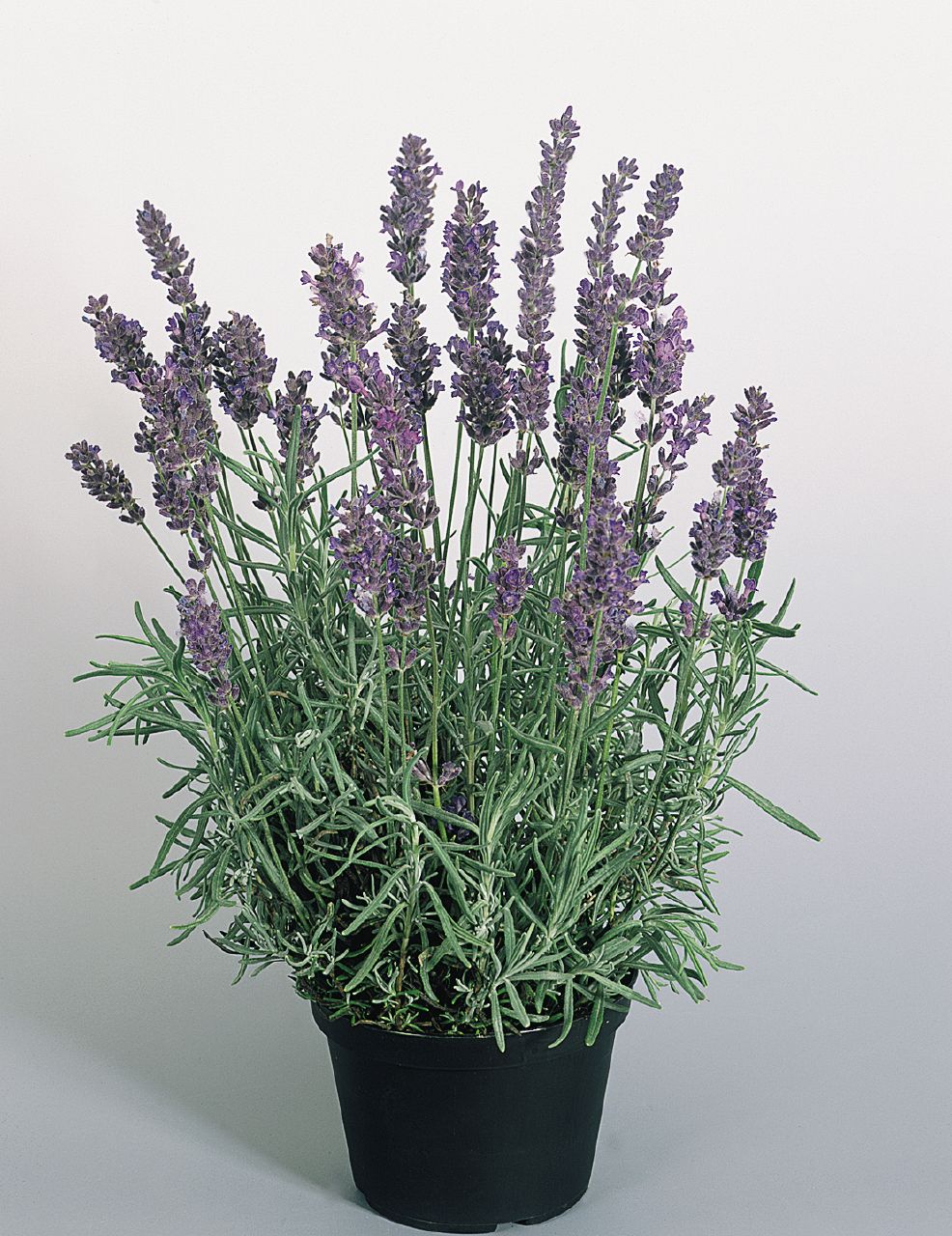 Hidcote Blue Lavender (L. angustifolia ‘Hidcote Blue’) has deeply colored violet-blue flowers and a compact uniform habit. It is an excellent choice for edging walks and paths, where the aromatic flowers and foliage can be easily enjoyed. It is also a good variety for drying, as it holds its color well. One of the most cold-hardy lavenders, Hidcote Blue is hardy to Zone 4. 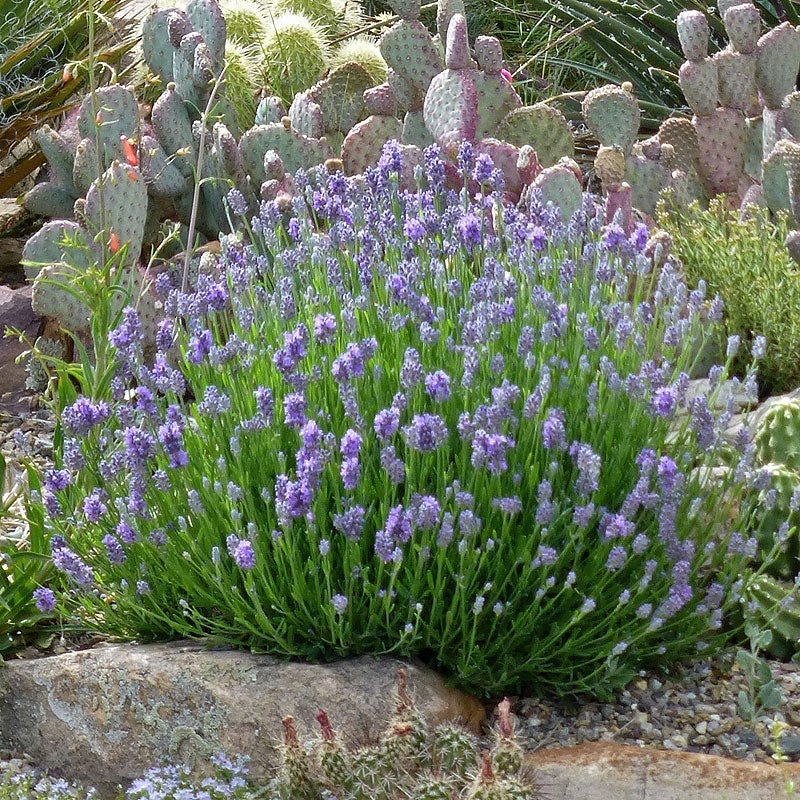 Wee One (L. angustifolia ‘Wee One’)  is a Plant Select variety, introduced in 2017, hardy to Zone 5. It is a dwarf English lavender with compact heads of lavender-blue flowers and dark blue calyxes. In flower, the mature plant is only about 10″ in height. Slow growing and very xeric, Wee One has excellent heat tolerance as well as  cold hardiness. It is a great addition to a rock garden or small spaces.

The intermedia hybrids (Lavendula x intermedia)  are also known as lavandin. These hybrids extend the blooming season as they flower later than English lavenders. They typically begin blooming in July or August and end in late summer. Two well known and proven varieties are Provence and Phenomenal. They are taller than most English lavenders reaching up to 3 ft x 3 ft. 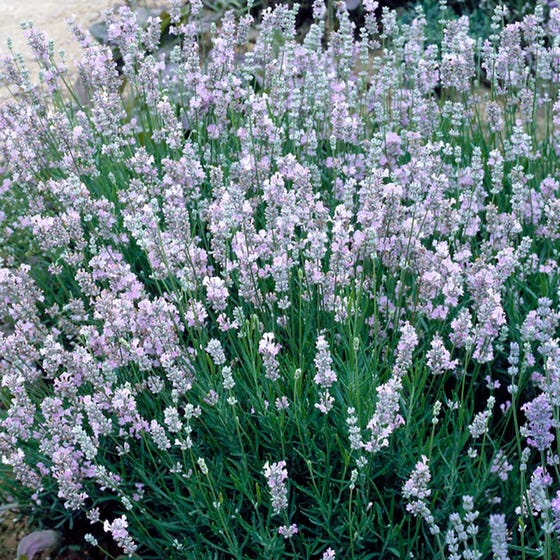 The cultivar Provence (Lavandula x intermedia ‘Provence’)  is hardy to Zone 5. Its foliage is silvery green and its blossoms of lavender-blue can reach up to 3 inches long.  It also boasts one of the strongest fragrances of the lavenders.  It reaches 12-18 inches tall by 24-36 inches wide in colder zones. In warmer climates it can reach 3ft x 3ft. 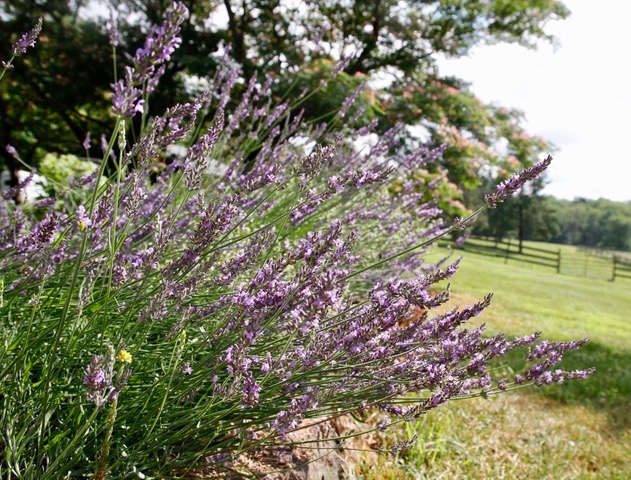 Phenomenal lavender is a newer cultivar with violet flowers. It is known for its cold hardiness and tolerance to heat and high humidity and is hardy to Zone 5. The plants grow into a mounded shape, with purple flowers on tall stems in mid-summer. It is a tall plant,  growing 30-32 inches tall and 30-36 inches wide.

Spanish lavender (L. stoechas) is only hardy to Zone 7. You may see it offered at local garden centers, so be aware that we must grow it in containers here and winter it over, or use it as an annual. With its perky “rabbit ear” blooms, it makes a great focal point in a container where the fragrant leaves and flowers can be enjoyed close up. Spanish lavender grows 14-16 inches tall and 15-18 inches wide.

French lavender (L. dentata) is not the same as Spanish Lavender (L. stoechas) although the names are often used interchangeably. French lavender is known as fringed lavender due to its serrated leaves. This lavender forms a bushy shrub of grey-green leaves that is easily pruned and thus one of the best types for forming into topiary shapes.

The flower heads on French and Spanish lavender aren’t useful as a culinary lavender because the flavor has heavy camphor or piney tones. The blooms do make nice lavender wands and potpourris. Harvest flowers for drying before any of the blossoms start to turn brown. 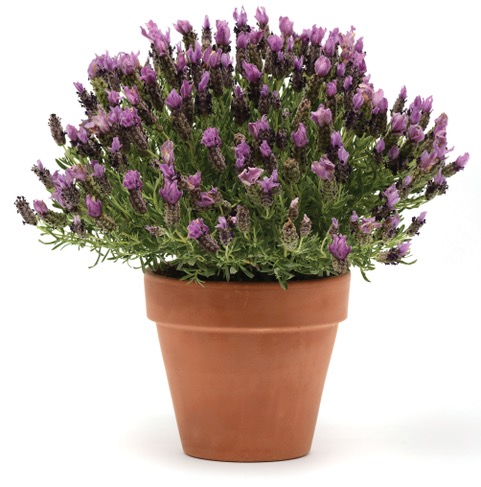 Above are Spanish lavender Bandera Purple in a container and a closeup of Spanish Lavender Double Anouk.

We plan to have eight lavenders at our HAS Gigantic Plant Sale this year.  We’ve ordered English  lavenders Wee One, Munstead, Hidcote, Hidcote Blue and Twickle Purple.  We have selected three well known and proven lavender intermedia hybrids: Grosso, Provence, and Phenomenal. We’re excited about lavender in 2020 — come find one or more for your garden!